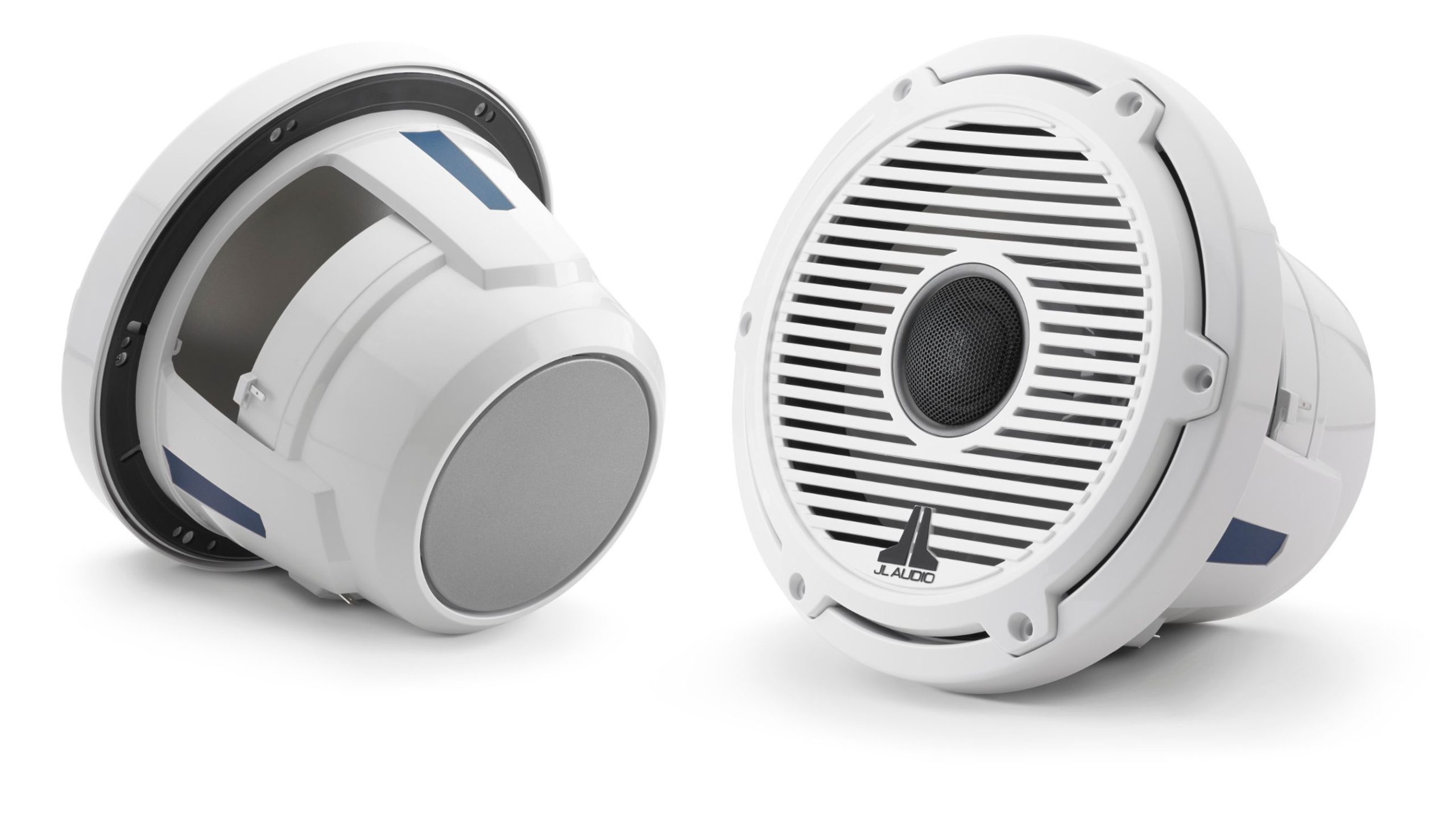 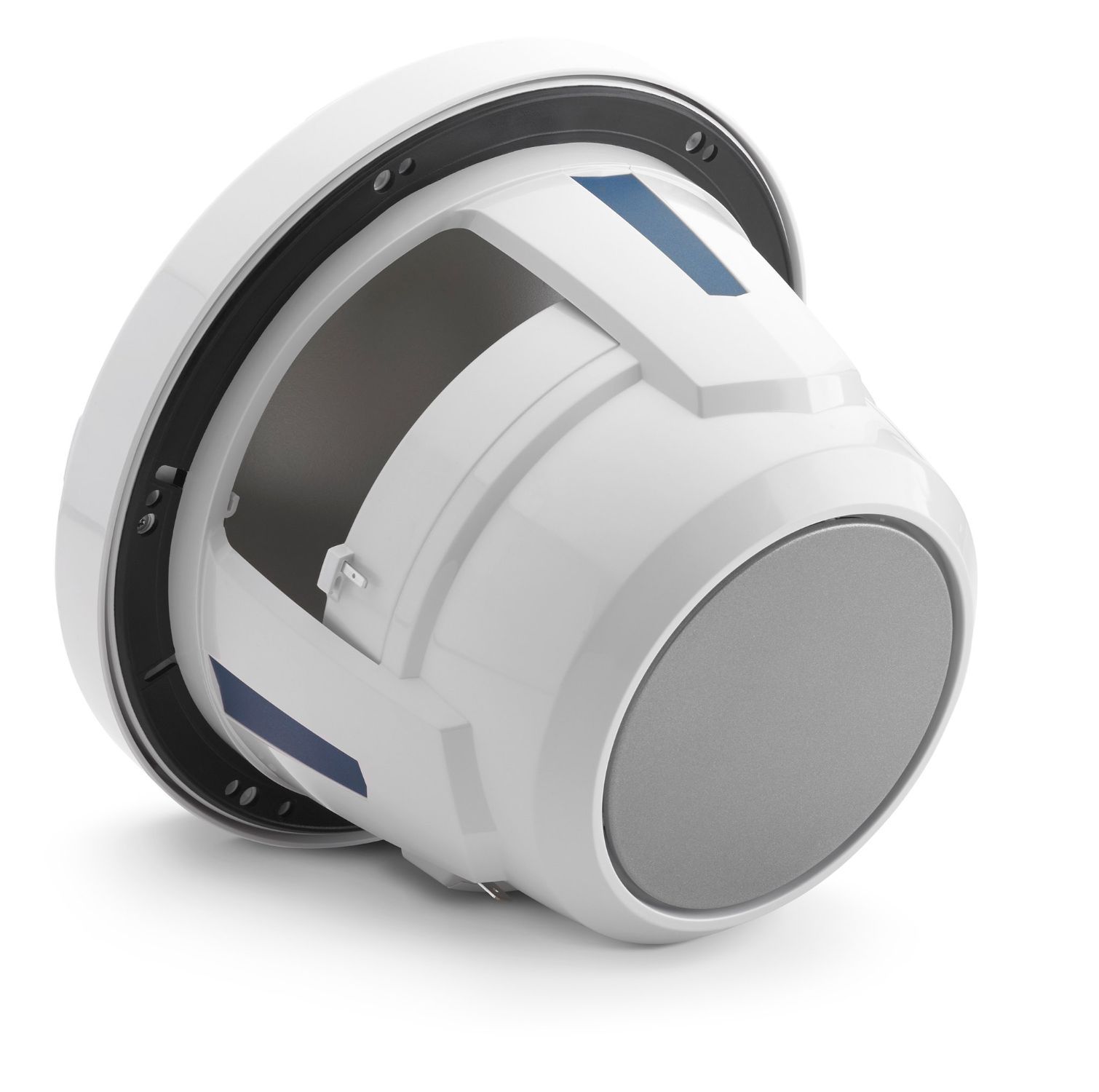 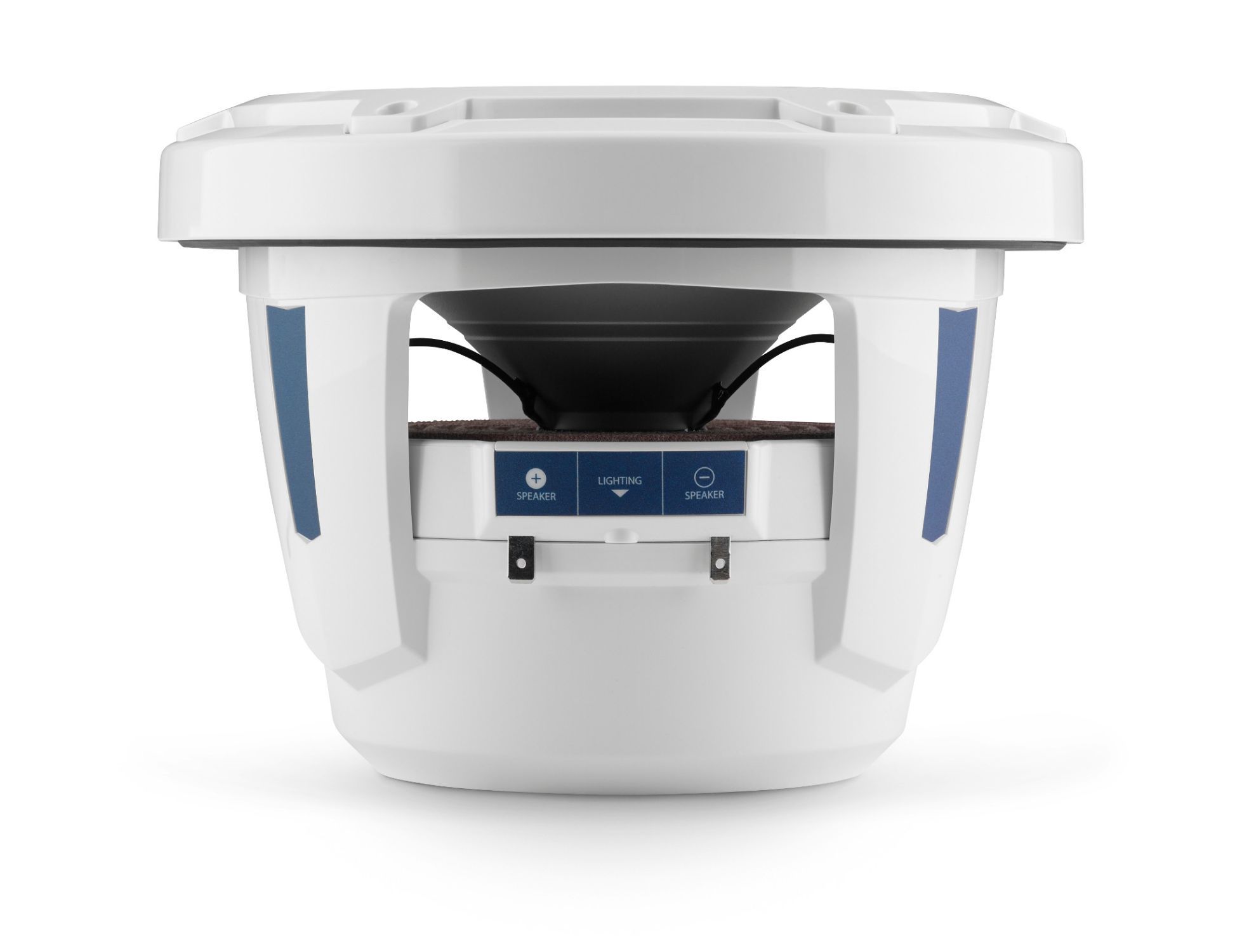 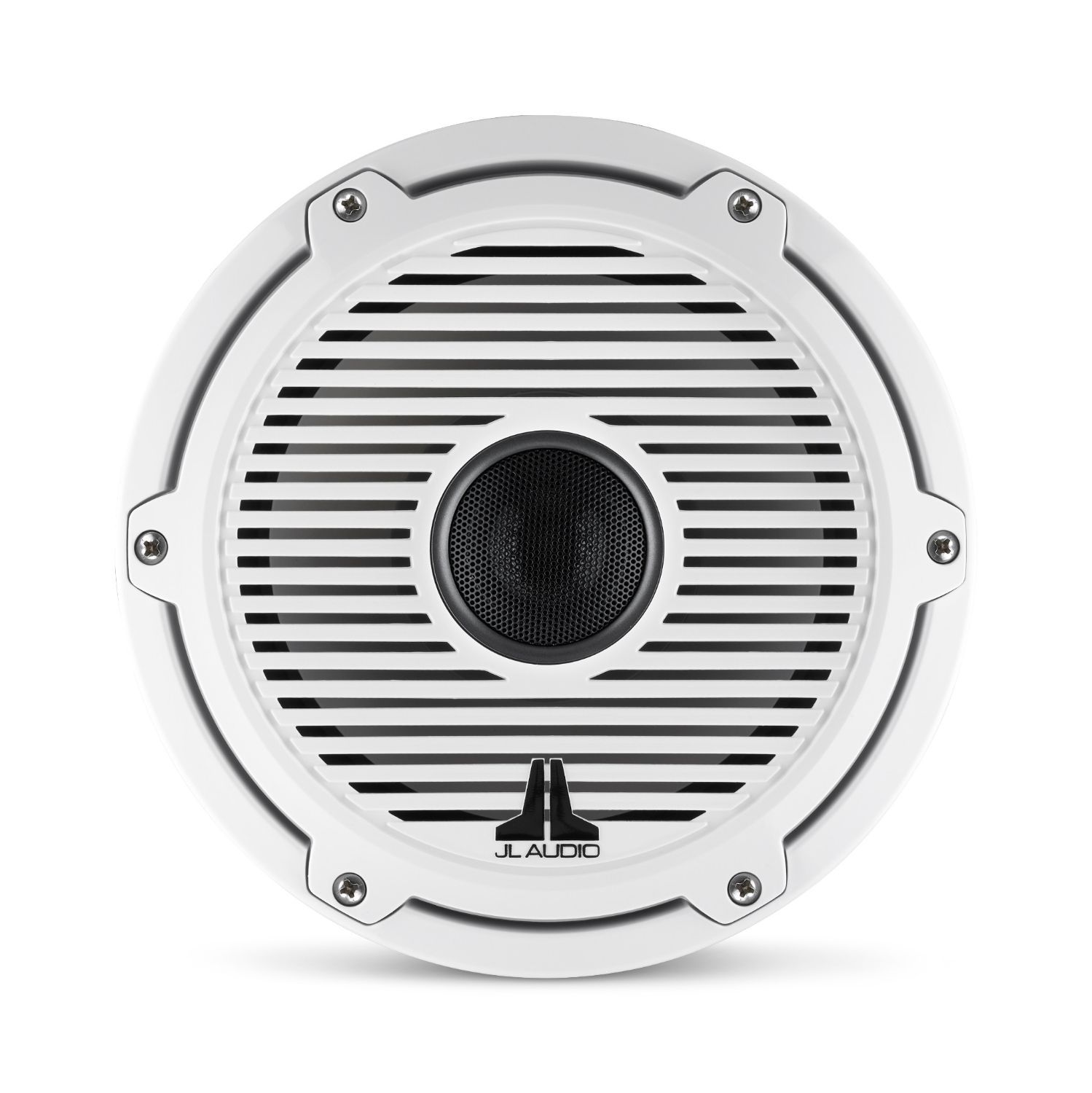 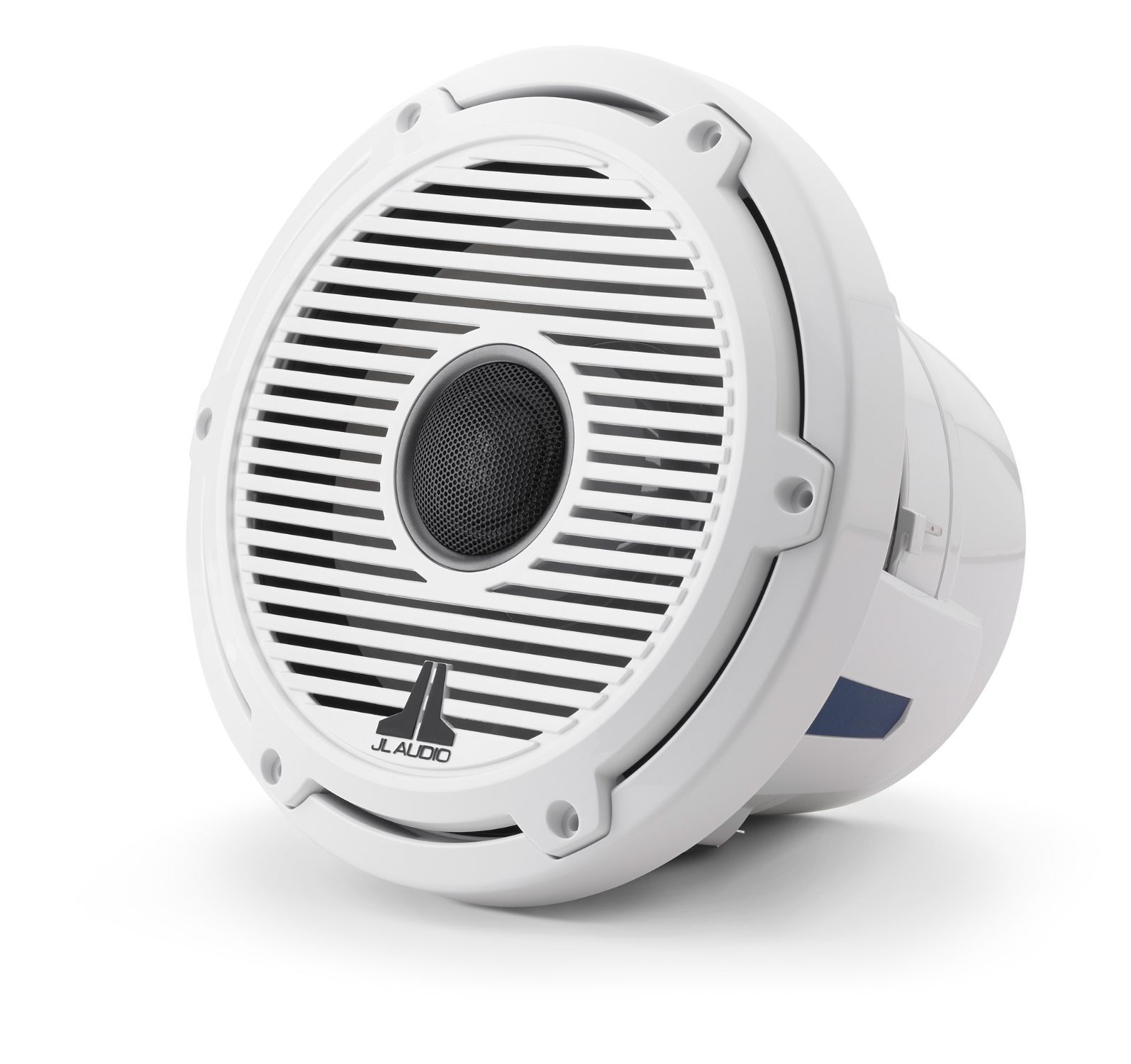 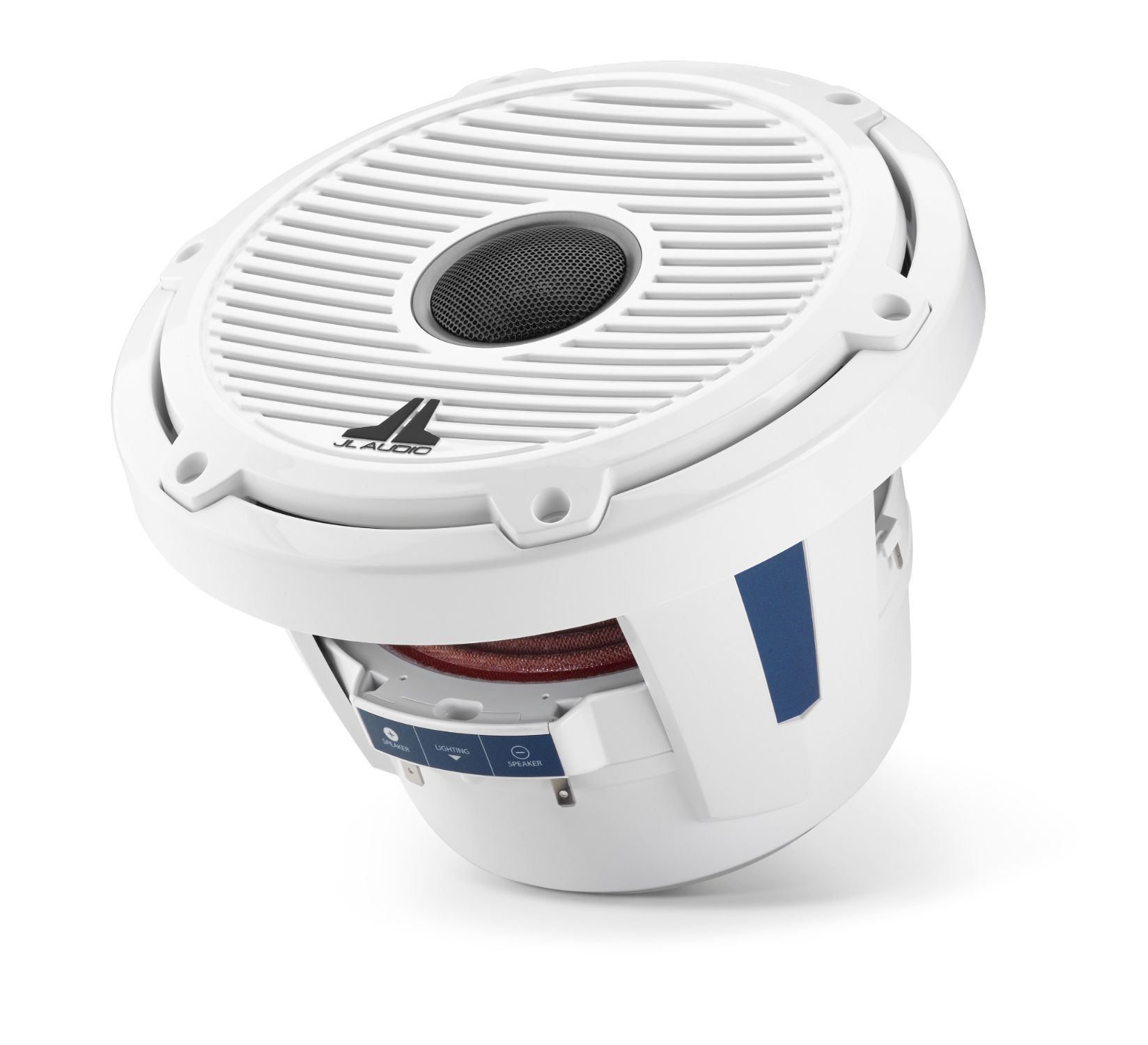 The same principle that makes our 7.7-inch marine speakers dominate over conventional 6.5-inch designs is delivered in a more powerful dose in our M6-880X 8.8-inch coaxials.

These 8.8-inch diameter monsters offer significant performance advantages over our 7.7 inch models, and a huge advantage over conventional 6.5 inch marine coaxials. Thanks to 36% more cone area and almost double the excursion capability, the M6-880X’s are capable of +6 dB greater low frequency output than our M6-770X 7.7-inch coaxial systems! The bass is so impressive that the M6-880X can be used without a subwoofer while still packing a very serious low-frequency punch. Used with a subwoofer, they offer vastly better dynamics and mid-bass impact than smaller speakers, making them the best choice when ultimate performance is desired.

To make sure that the high-frequencies sound just as good as the bass, our engineers have designed an oversized, 1.25-inch, silk dome tweeter for this model. This new tweeter plays louder, cleaner and extends lower in frequency to better mate with the 8.8-inch woofer. A multi-order, true 2-way passive crossover is concealed within the woofer chassis, shielded from vibration and corrosion. Also included, is an automatic tweeter protection circuit to minimize the possibility of tweeter failure.

Although M6-880X Coaxial Systems can be used with as little as 50 W per channel, but for best audio performance we recommend amplifiers capable of between 50-250 W of continuous power per channel.

Sold as a pair.

Detailed Information:
Since 1997, JL Audio has been at the forefront of Finite Element Analysis-based modeling of loudspeaker motors and suspensions. This research is aimed at decoding what we refer to as the “Loudspeaker Genome”… a project aimed at understanding the true behavior of loudspeakers under power and in motion. A major component of this integrated system is DMA (Dynamic Motor Analysis). Starting with the 15W3 and the W7 Subwoofers in the late 1990’s and early 2000’s, DMA has played an important role in the design of all JL Audio woofers sold today, including our component woofers.

DMA is a Finite Element Analysis (FEA)-based system, meaning that it takes a large, complex problem, breaks it down into small solution elements for analysis and then assembles the data to form an accurate, “big-picture” solution. DMA’s breakthrough is that it actually considers the effects of power through the coil as well as coil/cone position within the framework of a time-domain analysis. This gives us a highly accurate model of a speaker’s actual behavior under real power, something that the traditional Thiele-Small models or other low power measurements cannot do. Because DMA does not rely on a steady-state model, it is able to consider shifts in the circuit elements being analyzed. These modeling routines are intense, requiring hours to run for a whole speaker.

DMA is able to analyze the real effects of fluctuating power and excursion upon the magnetic circuit of the motor, specifically the dynamic variations of the “fixed” magnetic field. This delivers intensely valuable information compared to traditional modeling, which assumes that the “fixed” field produced in the air gap by the magnet and the motor plates is unchanging. DMA not only shows that this “fixed” field changes in reaction to the magnetic field created by current flowing through the voice coil, but it helps our engineers arrive at motor solutions that minimize this instability. Analyzing this behavior is critical to understanding the distortion mechanisms of a speaker motor and sheds light on the aspects of motor design that determine truly linear behavior:

Qualcomm® aptX™ Audio Coding Technology
Summary:
Bluetooth® streaming audio can now get closer than ever before to CD-quality sound, when using a streaming device equipped with the Qualcomm® aptX™ audio codec.

Detailed Information:
Originally developed in the 1980’s at Queen’s University Belfast, the aptX™ coding algorithm has been the secret weapon of the professional audio and film industries because of its ability to deliver CD-like quality audio over low-power Bluetooth® wireless connections.

When sound waves are transmitted over Bluetooth® as digital audio, they are first compressed to reduce their size using a coding method called “SBC”, which stands for Low Complexity Sub Band Coding. the compression process takes a series of snapshots of the audio at specific moments in time known as “samples” and, with enough samples, a Bluetooth® receiver can convert them back into a full sound wave.

Since Bluetooth® is limited by a maximum available bandwidth and because SBC was designed to use as little processing power as possible, some of the data is discarded using a process called “psychoacoustic modeling”. Psychoacoustic modeling removes portions of data that theoretically cannot be heard to reduce file size. The result is less than accurate audio reproduction.

To overcome the low-power constraints of SBC and the bandwidth limits of Bluetooth® audio, the patented aptX™ coding algorithm applies a different approach at bit rate reduction. By using a method of “time domain ADPCM” to encode the audio, aptX™ uses fewer bits per sample, so the files are smaller and arrive transparently and intact. The result is full bandwidth audio reproduction that requires less energy and size for transmitting.

Detailed Information:
Building serious marine products requires a real commitment to environmental testing and materials specification. To this end, JL Audio has invested in Ultraviolet testing chambers (to simulate years of sun exposure) and Salt Fog chambers (to simulate years of exposure to salt-water environments). This testing is critical to building products that will not only sound great in your boat, but will also sound great for many, many years.

Built in U.S.A. with Global Components

Summary:
JL Audio’s Miramar, Florida loudspeaker production facility is one of the most advanced in the world.

Detailed Information:
At a time when most audio products are built overseas, JL Audio’s commitment to in-house loudspeaker production continues to grow. To pull this off in a competitive world market, our production engineering team has created one of the world’s most advanced loudspeaker assembly facilities and established a global network of quality component suppliers who build to our specifications. This, combined with our commitment to state-of-the-art assembly technology, allows our skilled workforce to efficiently build JL Audio products to extremely high quality standards, right here in the U.S.A.

Since most of our premium loudspeakers incorporate proprietary, patented technologies requiring specific assembly techniques, we find it is vital that the people who designed them have close access to the people manufacturing them. The following JL Audio products are built in our Miramar, Florida factory, with global components: