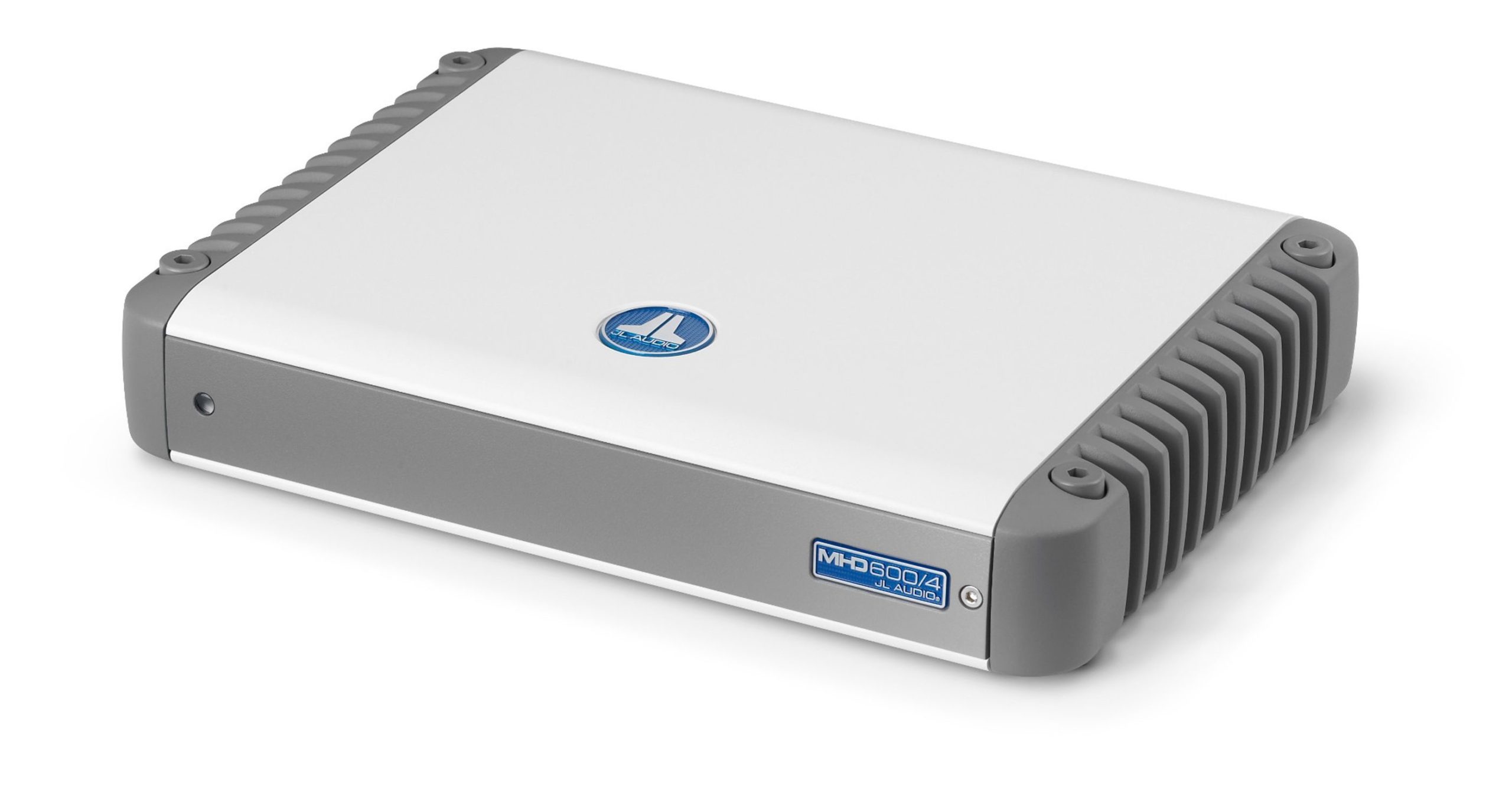 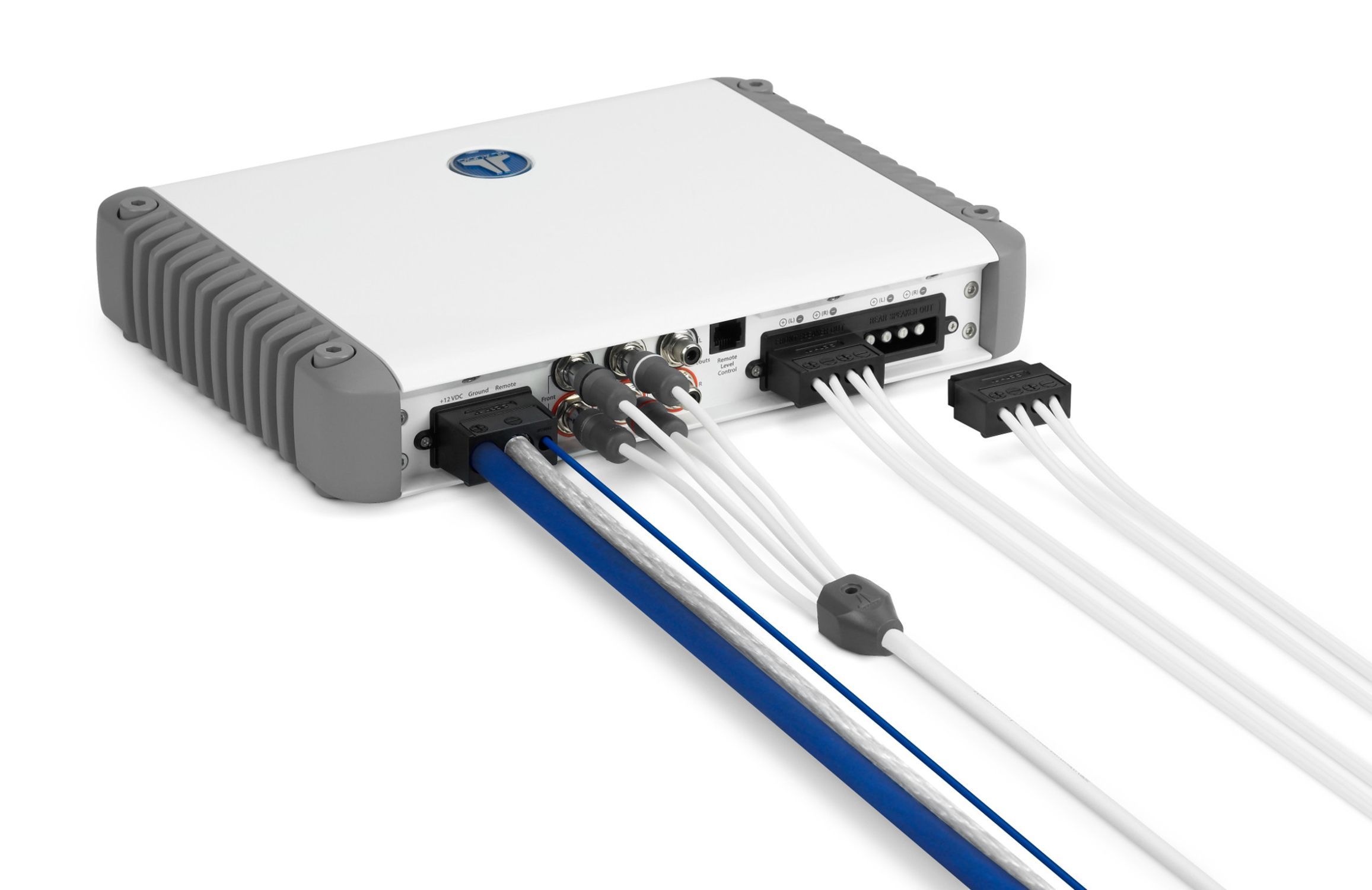 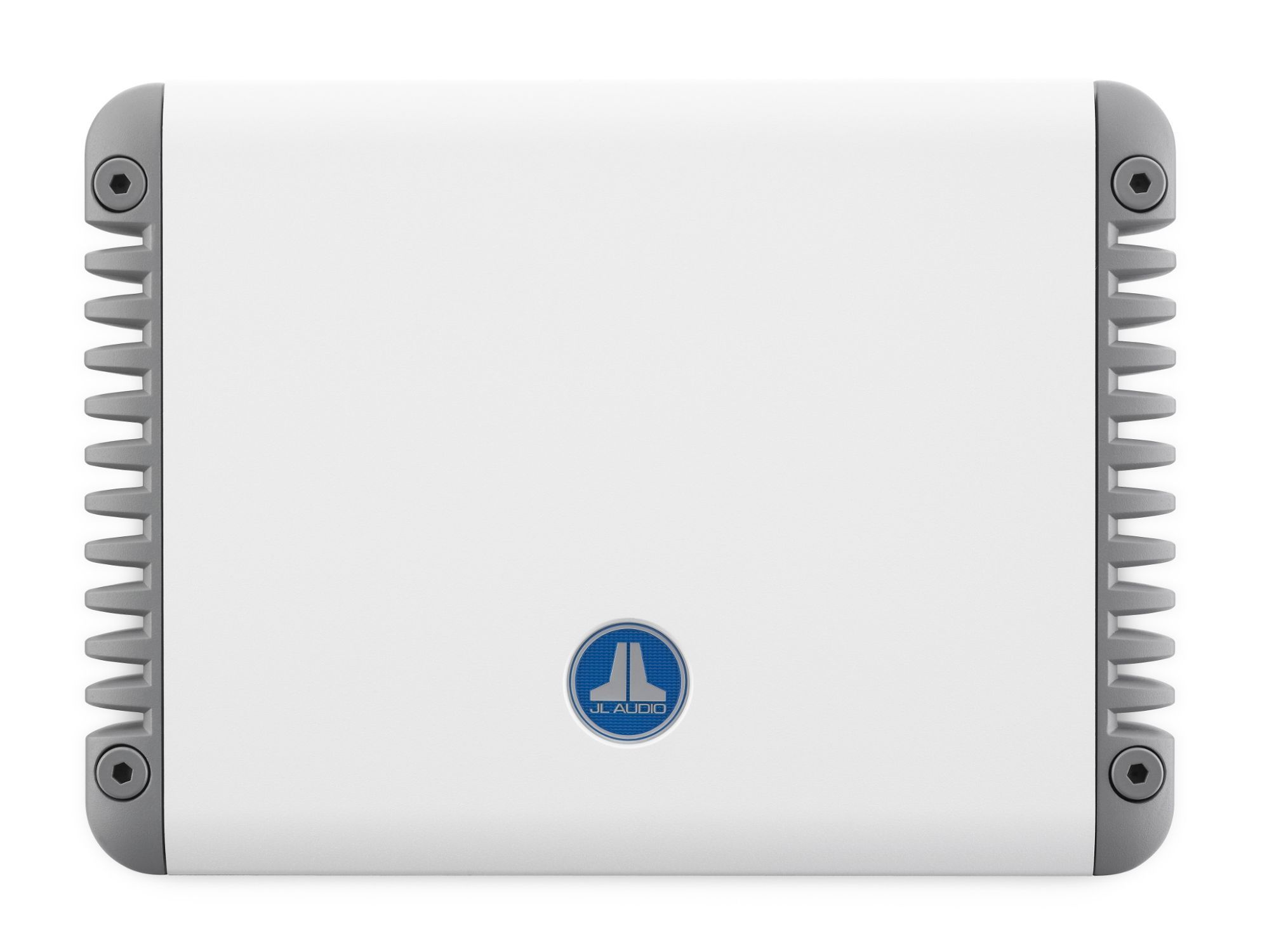 The MHD600/4-24V is the ideal satellite amplifier, delivering huge dynamics with pristine resolution. It can also be deployed, on its own, as a very capable 3-channel system amplifier with 150W x 2 to the satellites and 300W x 1 to a subwoofer system.

This marine amplifier features white and gray powder-coat finishes, a gasketed cover for the controls and stainless steel hardware for durability in the marine environment.

This amplifier is designed for operation in vessels with 24 volt, negative-ground electrical systems. Use of this product in vessels with positive ground and/or voltages other than 24 V may result in damage to the product and will void the warranty.

Detailed Information:
Single Cycle Control is a unique approach to controlling a full-range Class D amplifier. By tracking the audio signal, comparing it to the real PWM waveform and then correcting it in each and every cycle (over 400,000 times per second), a multitude of distortion-causing mechanisms can be tightly controlled to enable pristine amplification.

In more technical terms, our approach is a non-linear control method that monitors the switched variable on a cycle-by-cycle basis so that, in each cycle, the average value of the output (power to the speaker) accurately tracks the input signal. This ensures that power supply disturbances, non-ideal switching edge behavior, component non-linearities and other distortion-causing problems are completely cancelled and taken out of the equation.

In addition to the sonic benefits of Single Cycle Control Class D, the technology also results in outstanding efficiency (80% at 1/2 rated power for the whole amplifier, including its power supply), which translates to 60% less current draw than a typical Class A/B car amplifier of equal power. This tremendous efficiency advantage also leads to less generated heat which allows the chassis size to be reduced to about 1/4 the size of a similarly powerful Class A/B design.

So, while there may be less expensive ways to make a full-range switching amplifier, no other Class D control system works faster or more accurately than Single Cycle Control™, which is why no other mobile audio amplifier in the world performs like a JL Audio HD.

“Regulated” means that the power supply adjusts its operation so as to maintain the amplifier’s rated power output and low distortion operation over a wide range of vehicle voltages (11V-14.5 V). This contrasts with conventional, “unregulated” power supplies, which allow rail voltages to sag in direct proportion to drops in the supply voltage. This can result in significant power losses when battery voltage decreases, even if those voltage dips are short in duration. This manifests itself audibly as increased distortion. With a JL Audio R.I.P.S.-equipped amplifier, the rail voltage and clean power output remain completely stable in real-world systems, resulting in superior fidelity and stability.

The “Intelligent” portion of the R.I.P.S. System is a circuit that actually monitors output current to optimize the amplifier’s output power over a wide range of load impedances (1.5 ohm to 4 ohm per channel).

Conventional amplifiers are designed to produce optimum power at a particular impedance (2 ohms, for example). When asked to run above that impedance (say, 4 ohms), these amplifiers lose power (half their power from 2 ohms to 4 ohms). This will not happen with a JL Audio HD or ‘Slash’ amplifier because the R.I.P.S. System detects the actual impedance being driven and adjusts the amplifier’s operation to deliver optimum output. The entire process is seamless, automatic, and results in incredible dynamics for satellite channels and consistent power output for a wide range of subwoofer configurations. It also takes into account the real impedance of the system, rather than relying on often inaccurate assumptions based on a speaker’s rated impedance.

The bottom line: Optimum power, at any impedance between 1.5 ohm and 4 ohm per channel, at any vehicle voltage between 11V and 14.5V.

Detailed Information:
Should a JL Audio amplifier equipped with Advanced Rollback Protection reach an unsafe operating temperature, a special circuit rolls back peak power output, without changing gain, until the amplifier cools down to a safe operating temperature. The condition is generally indicated by a red “Thermal” or “Status” LED state. On VXI amplifiers, the LED ring will flash red. Once the amplifier cools down, the circuit restores full peak power output and the indicator reverts to its normal state. The operation of Advanced Rollback Protection is inaudible in most cases, but it ensures that your music keeps on playing, even under the most demanding conditions.

Detailed Information:
Most car audio amplifiers rely on big lumps of metal that do a good job of storing heat, but not such a great job of getting rid of it. RealSink™-equipped JL Audio amplifiers feature real cast-alloy heat sinks with vertically-oriented fins. This design is far more effective than the lump-of-metal approach, utilizing the physics of convection and radiation to more effectively exchange heat with the surrounding air. The design of these heat sinks was refined through extensive finite-element analysis, resulting in amplifiers that keep their cool under the most demanding conditions.

Detailed Information:
The compact dimensions of the HD amplifiers open up a whole range of installation options simply not possible with larger designs. To give you as many mounting options as possible, the design incorporates flexible mounting options for single or multiple amplifier installations.

Standard Mounting: The mounting screws secure the amplifier to the mounting surface and are concealed by the four corner caps, resulting in a very clean look.